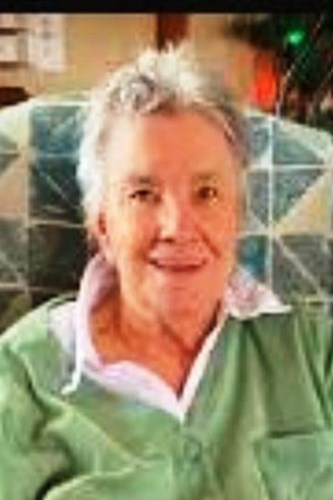 Alberta Rose 'Bert' Karraker, the youngest of nine children, was born at home in Pleasant Valley, Phillips County, CO to Bertrand Jaycox and Beulah Burl (Beam) Jaycox on July 4, 1935. Bert passed away at home in Cortez, CO with family by her side on Wednesday, October 20, 2021.

Bert and her siblings were raised on the family farm and attended the one room school house in the Pleasant Valley community until high school, then had to travel to or board in the town of Holyoke, CO. They were all proud of their Iroquois heritage.

Alberta's oldest brother, Everett Jaycox, born January 4, 1911, and Pearl served as parents along with her sister Vera Hagemann, the fourth child, born April 4, 1918, and Harold. Her uncle Luther Beam and Mable also cared for her. Father Bertrand was a renowned thresher, and during the dust bowl, passed May 4, 1935 with dust pneumonia, exactly two months before her birth. Everett writes in his book "My Humble Realm" of the family's phenomenal fours. Alberta's mother, Beulah, and older sisters were carried to soft landing by a tornado in an unusual storm in November, 1922 and Bert's brother, Kenneth (Jake) was born the next day. Alberta was two years old when her mother, Beulah, passed from cancer, on her back, they say resulting from that tornado landing.

Alberta met Don and they both, with the loss of parents at a young age, were determined to keep a tight knit family. They were married in Yuma, CO on September 14, 1952. Alberta's many careers were connected to Don's, and both would always say they were in "public relations" whether it was jewelry/gift shop, bakery, flower shop, or volunteers with the American Legion, Elks, Fire Department, and Little League. Bert also prided herself as a "representative' at Ma Bell Telephone all those years. The management of the Meeker Golf Course and tournaments with golf and bowling, and semi pro baseball, all from Holyoke, CO, to Cortez, CO, to Mesa, AZ, and back again. She was a great cook, a nurse, an interior decorator, and more. Alberta Rose loved talking with all the children and elderly, all ages, during demos at Wal Mart. Bert loved serving and giving her time. She was a patriot and a real firecracker!

Arny took her fishing one 4th of July. She was enjoying the day with Arny as he fished. The game warden came over the hill just as she caught Arny's pole sliding in the water so he wouldn't lose his fish. They had to pay a $50 fee since Alberta didn't have a license, but she said it was the best birthday.

Surviving Alberta are her children, Mitzi Byers and husband, Bill, and Arny Karraker and wife, Patti, all of Cortez, CO; four grandchildren, Tisha Dawn Ludiker and husband, William of TN, Megan Byers of Moab, UT, Aaron Karraker and wife, Kellie of Thornton, CO, Abram Karraker and wife, Kim of Thornton, CO; 12 great grandchildren, Tristan Ludiker (Taylor), Payton Ludiker (Sydney Rose), Carleah Ludiker, Khriz Kardokus, Mordecai Risenhoover, Kamryn Churning, Austin Karraker (Haley), Ayden Karraker, Aubree 'Rose' Karraker, Brooklyn Karraker, Bailey Karraker, Rylan Karraker,; and three great great granddaughters, Kendall Karraker, Oaklee Karraker, Blakelee 'Rose' Karraker; many nieces and nephews; and beloved friends. She was preceded in death by her husband, Don; her son, Mitchell Donny Karraker (October 4, 1989); and granddaughter, Mesha Karraker.
Published by The Journal on Nov. 5, 2021.
To plant trees in memory, please visit the Sympathy Store.
MEMORIAL EVENTS
To offer your sympathy during this difficult time, you can now have memorial trees planted in a National Forest in memory of your loved one.
MAKE A DONATION
MEMORIES & CONDOLENCES
3 Entries
My condolences to Mitzi, Arny and the whole family on the death of your mother.
Chris Maynes Stramel
November 10, 2021
Arny, sorry to see the passing of your mom. Even though I never knew your mom, I know she raised a wonderful family. How fortunate we were to grow up in Cortez during the 60's & 70's. Just remember the Love your mom shared all these years. May God bless and guide us as well as our loved ones. JoAnn Veach Klingaman
JoAnn Veach Klingaman
November 7, 2021
I graduated with Arny in 1972. "Bert" was so kind to me. She would allow me to stay overnight many times in her and Don´s home. I haven´t and will not forget those days. Her love and kindness was so much appreciated. Bless you Mitzi and Arny and all of Bert´s family.
Carl Neskahi
November 6, 2021
Showing 1 - 3 of 3 results