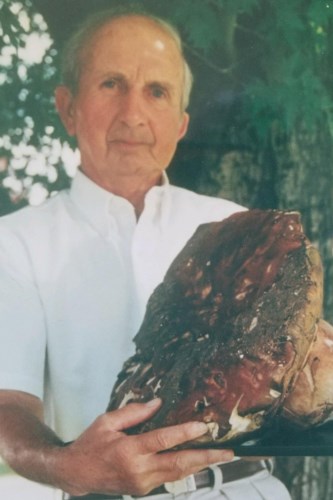 August Pasquin, formerly of Cortez, Colorado passed away on November 4th, 2021. He was born in Tollerburg, Colorado on July 23, 1925 to parents who immigrated from Austria in the early 20th century.

August grew up in Aguilar, Colorado and worked in a coal mine in his teen years. He also learned the masonry trade. At a very young age he discovered a very special gift-the ability to water dowse with a tree branch-using it to find numerous water wells for people in Aguilar.

August graduated from Colorado State University with a bachelor's degree in agriculture. He settled in Cortez, Colorado in 1950 and was married in 1952 to Naomi Pasquin of Furguson, Missouri. He was hired to establish the high school's first-ever Vocational Agriculture (VA) program. He taught VA classes from 1950 until 1959 with the VA program being so successful the school built a facility just for his classes. (Today this facility is the maintenance building for the Cortez Middle School.) Students were taught farming techniques and crop production in a very diverse program that had students annually attending the state fair-one year competing against VA students from four other states and taking first place in Parliamentary Procedures. As if he wasn't busy enough, August was well known and respected by local farmers for the evening agriculture classes he taught.

Following his years as a VA teacher, August opened an A&W drive in on North Broadway, just north of where the Vectra Bank is today. In business for over 20 years, even to this day long-time residents of Montezuma County fondly remember the fabulous hamburgers and the ice-cold root beer that was always served in frosted mugs.

Having led a blessed life as a devout Catholic, August was very active at Saint Margaret Mary's Catholic Church in Cortez, serving as President of the Parish Council for three years.

August's ashes will be scattered in the mountains in memory of his great love for the mountains and the many years of joy hunting mushrooms brought him.
Published by The Journal on Nov. 15, 2021.
To plant trees in memory, please visit the Sympathy Store.
MEMORIAL EVENTS
To offer your sympathy during this difficult time, you can now have memorial trees planted in a National Forest in memory of your loved one.
MAKE A DONATION
MEMORIES & CONDOLENCES
4 Entries
Uncle August will be greatly missed. Thankfully, you couldn't ask for a better guardian angel. I have no doubt he will be watching over everyone. Much love, prayers, comfort, and many blessings to aunt Noni, Mike, Terry, and all of the family. Suzie Pasquin & Carl Williams
Suzie Pasquin
Family
November 29, 2021
August was truly a man who led with his heart. The world will miss his kind soul.
Linda Pasquin
Friend
November 16, 2021
Mr. Pasquin is as kind and generous a man as you will find in your lifetime.
Stephen Michael Lord
Friend
November 15, 2021
With sincere condolences on the loss of your kind hearted father. Steve and Gaye Barwin
Gaye Barwin
Friend
November 15, 2021
Showing 1 - 4 of 4 results