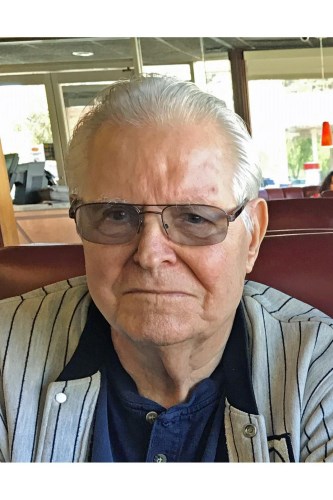 BORN
1935
DIED
2021
FUNERAL HOME
Ertel Funeral Home
42 N. MARKET STREET
Cortez, CO
Funeral services for Billy D. Hooten will be held at 1 p.m. on Thursday, November 4, 2021 at Ertel Memorial Chapel. Pastor Todd Erlandson will officiate. Interment will follow at Cortez Cemetery. Visitation has been scheduled for Wednesday evening from 5 - 7 p.m. at the funeral home. A reception will be held at the American Legion after the committal service at the cemetery. Please join the family to celebrate Bill's life and legacy.

Billy was born on February 12, 1935 in Higden, Arkansas. the son of Joshua and Jessie (Birdsong) Hooten. He passed away on Tuesday, October 26, 2021 at his residence at the Commons Assisted Living Center in Grand Junction, Colorado at the age of 86.

Billy was raised in Cleburne County, Arkansas and in his youth, picked cotton with his siblings to earn money for the family. After he turned 18, he found work where he could, to include the Russell Stover candy factory in Kansas. Billy found himself in East Peoria, Illinois, working for Caterpillar Tractor Co. until he was laid off. Billy's brother, Ellis, was surveying land out west so he joined him, working in Utah and Colorado, where he met his bride to be, Eva Koppenhafer. They were married on July 9, 1959 and Billy was called back to Caterpillar. He was laid off again and they moved back to Cortez where their first son was born. They moved to Phoenix where Billy worked construction and then to Arkansas. Billy was called back to Caterpillar. Billy and Eva lived in Creve Coeur where their other two sons were born and remained there until his retirement from Caterpillar after 35 years of employment on March 27, 1986. Billy, Eva and their youngest son, Damon, moved back to Cortez, where they remained until November, 2019 when they moved to Grand Junction.

Billy became a follower of Jesus Christ when he was young and never wavered in his faith in God throughout his life. He was a daily reader of the Bible, a prayer warrior and faithfully attended church until health problems prevented him from doing so. There is no doubt when he went to sleep for the last time, he woke up in heaven and in the glory of God.