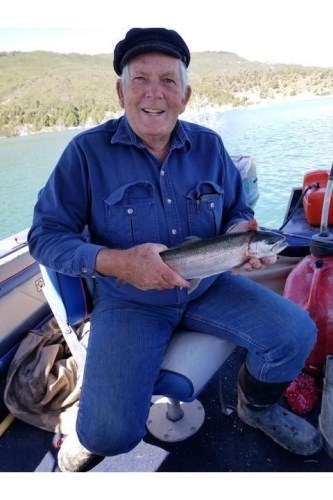 FUNERAL HOME
Martin Mortuary - Grand Junction
550 North Ave
Grand Junction, CO
George Lyons, 77, joined his loved ones in heaven, October 23, 2021. His service will be held at the Collbran Congregational Church at 11:00 am on October 28,2021.

George was born on March 12, 1944 in Las Vegas, Nevada to Raymond Lyons and Shirley Jaquette. He attended Mesa College and then served in the Army 1965-1967. In 1967 George married Jan Mendenhall and they had five children. Cindy, Brian, Dan, Kimi and L.J.

George worked as a Guide and Outfitter and later moved to Arizona in 1986 and created a Service Station Repair business, he moved back to Colorado in 1992.

George is survived by his treasured brothers Ray and John and sisters Cindy, Shirley Ray and Suzanne.

George loved hunting and guiding, and spent many years of his life in the mountains. He shared his knowledge and appreciation of the outdoors with his family as well as many friends and hunters throughout his life.

George was a strong, loving and supportive father and grandfather to his beloved grandchildren, Takis, Ryan, Tasia, Kevin, Lance, Raelynn, Alexis, Filip, Alex, Jordon, Becca, George, Olivia, Michael, Allen and Theodore. He will be missed tremendously.
Published by The Journal on Oct. 26, 2021.
To plant trees in memory, please visit the Sympathy Store.
MEMORIAL EVENTS
To offer your sympathy during this difficult time, you can now have memorial trees planted in a National Forest in memory of your loved one.
Funeral services provided by:
Martin Mortuary - Grand Junction
MAKE A DONATION
MEMORIES & CONDOLENCES
Sponsored by Martin Mortuary - Grand Junction.
3 Entries
I just found out that George has passed away. My condolences to Jan and the family. I met George at a baptism in Greece and I was hoping to see him again on a visit to Colorado. May George find his peace and always be in the heart of everyone.
Sabine Henschen , Germany
Other
November 14, 2021
George will be missed, here on earth, by so many, but received warmly in heaven by so many as well. I have so many fun memories of George and my brother Ron and all the things they did together.
Ceola (Michaelsen) McDonough
School
October 27, 2021
I have so many precious memories of George and the whole family...but one of the most memorable, and sort of life changing, was when I came to Colorado after college to help at hunting camp on Bald Mountain with George and Jan. I'd never been and really had no idea what it would be like. On the wagon ride up it was so cold someone lent me their felt lined boots...wow, that was something I never knew about. Helping Jan cook in the tent where she, George and I slept...they were so kind and gracious to me, who knew so little. The one hunter who asked to take my picture because he was going to tell his wife about the 'indian helper' at camp.....he got that 'misinformation' from guess who...yes, George. it made for a good laugh! :) Riding out from camp to where you could see SO MUCH, SO BEAUTIFUL! Thank you George (and Jan) for the treasured memories you've given me over the years! I love you! always, Ila Jean
Ila Jean Darling Hohmann
Family
October 26, 2021
Showing 1 - 3 of 3 results